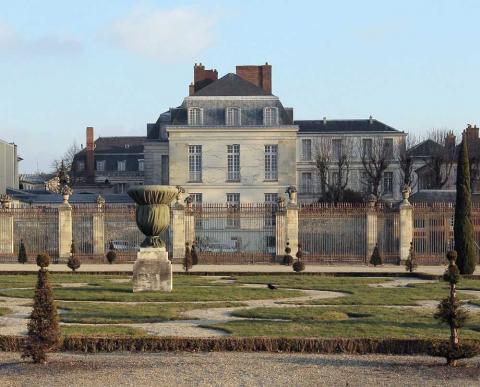 Hotel du Grand Contrôle is a hotel built in 1681, in the current street of the Independence-American, in Versailles. Located in the prolongation of the wing of the South of the castle and overlooking the gardens of the Orangerie, its construction has sometimes been attributed to Jules Hardouin-Mansart. It has been listed as a Historical Monument since 1929. It is owned by the Public Establishment of the Castle, the Museum and the National Estate of Versailles and not used today (2016), it should be granted to become a luxury hotel.

Built in 1681 for Paul de Beauvilliers, Duke of Saint-Aignan, first gentleman of the King's Chamber, Minister of State, Governor of the Duke of Burgundy and son-in-law of Colbert.

Sold in 1720, by his widow to Antoine Chaumont, Lord of Ivry sur Seine, which had been enriched thanks to the system of John Law. His widow, ruined at the fall of the financier, must yield the hotel to Louis XV in 1723. The king reunited him to the Domaine de Versailles in 1724 to install the General Control of Finance (equivalent to a Ministry of Finance).

During the Revolution, the hotel served as the seat of the Commercial Court, then of residences to different individuals: under Louis - Philippe, the architect of the castle, Frédéric Nepveu lodges on the ground floor.

Beginning in 1857, the hotel was assigned to the Mess of the Grenadiers, the Zouaves, and then the Imperial Guard. Presented to the Ministry of War in 1872, he served the following year as a military library and a circle of officers at the place d'armes.

As a result of the reorganization of the armies, it was handed over to the public establishment of the castle, the museum and the national domain of Versailles, in 2008.

In December 2010, Jean-Jacques Aillagon announced at a press conference that the hotel would be transformed into a luxury hotel of twenty-three rooms by a private company. The project is relaunched in 2015 by its successor Catherine Pégard and a tender launched but also covering the Hotel du Petit Control and the Pavilion of the first 100 steps. The concession was finally granted in March 2016 to the group LOV Hotel Collection (Stéphane Courbit) and Alain Ducasse Entreprise.